As told by Andy Long: 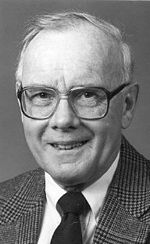 The "Function Box" was the brain child of my dad, Clifford Long, a mathematics professor at Bowling Green State University. He dreamed of a function box, a machine for dynamically producing surfaces of functions of two variables. He was big on what are now known as manipulatives: for example, he built a large wooden hyperbolic paraboloid to use in multivariate calculus, because he knew that lots of students have trouble visualizing surfaces (e.g. those projected onto a screen). But this was an extremely time-consuming and energy-intensive process: he wanted something computer-controlled, that would allow him to dynamically produce such surfaces.

Years ago I bought him the toy PinPressions, which illustrates the idea, only backwards:

Honest Abe as a matrix

Abe as a function

Suppose we're interested in the function represented by the height of Abe Lincoln's face above a table: you could take a reading of the surface using pinpressions; if the pins were all wired, we could read off the coordinates (as a matrix), and then create a function to interpolate those values. This is an example of rapid prototyping. 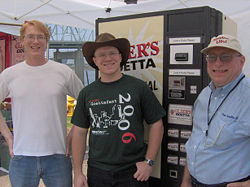 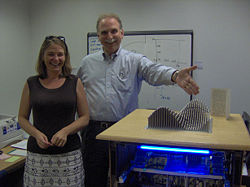 Phil Schmidt and Kirsty Fleming, supporters of the project
Retrieved from "http://norsemathology.org/mediawiki-1.38.1/index.php?title=The_Function_Box&oldid=104"