An article in response to Grant

A presentation in response to Grant

Grayson's 'Problem of the Week' Page

The prey loads varied greatly between the two locations ranging from 0.25 to 2.5 times the weight of the wasp (Fig #). The upper limit for prey load being 2.5 is consistent with Grant (2006). Analogous to Figure 3 by Grant (2006) we have plotted the data by location as well as by cicada species, however, the prey loads are broader because of the broad range of cicada sizes. The wasps in Newberry are small and therefore constrained from provisioning with large cicadas. They almost exclusively carry prey loads that are below their own weight. This is illustrated by the data points below the line of slope = 1. The wasps in St. Johns are larger as well as the cicadas they provision with. Here, the cicadas cluster around the line of slope = 2, which is similar to Figure 3 by Grant (2006). As wasp size increases, the cicadas provisioned with increase in size while staying between prey loads of 1.5 and 2.5. It is interesting to note that the smallest wasps in St. Johns that provisioned with a medium sized cicada have high prey loads. This suggests that if they were slightly smaller the prey load for carrying a medium sized cicada may exceed their limitations and they would then be constrained to carrying small cicadas such as the situation in Newberry. In fact, the smallest wasps in St. Johns provisioned with small cicadas. This is in support of our hypothesis that the wasps are selective based on size.

The relationship of cicada right wing length to cicada wet mass is estimated with two power models by using stepwise regression. There is a total of three parameters with all three classes of cicadas (small, medium, and large) sharing the same exponent of 3.02. In fact, the standard error for the exponent (.0422) includes 3.00. We are estimating a three dimensional measurement (mass) from a linear measurement (length) and so it is not surprising that we are raising right wing length to roughly its cube. The small and large cicadas are modeled with a coefficient of 0.017 and the medium cicadas with 0.0229. Logarithm transformations were done on both the RWL and wet mass data in order to carry out the linear regressions and then transformed back to achieve the final power models. We used a combination of forward selection--where we begin with the intercept term, add in variables one at a time, and include any that are statistically significant--and backward elimination--where all variables are initially included and each one is tested and removed if it is not significant. If we were to analyze each class of cicada separately we would obtain three regression models with a total of six parameters. By using stepwise regression we are able to reduce the number of parameters needed to estimate cicada wet mass down to three. 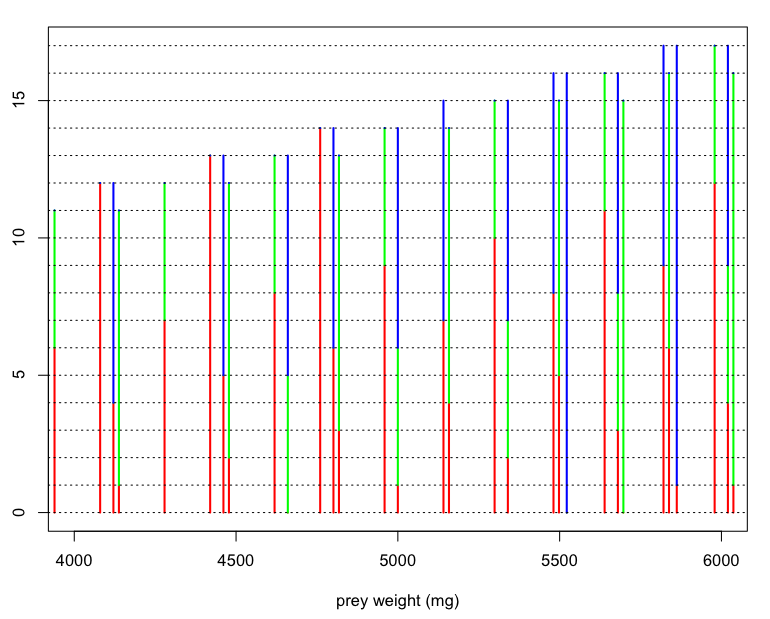 The data in an Excel file 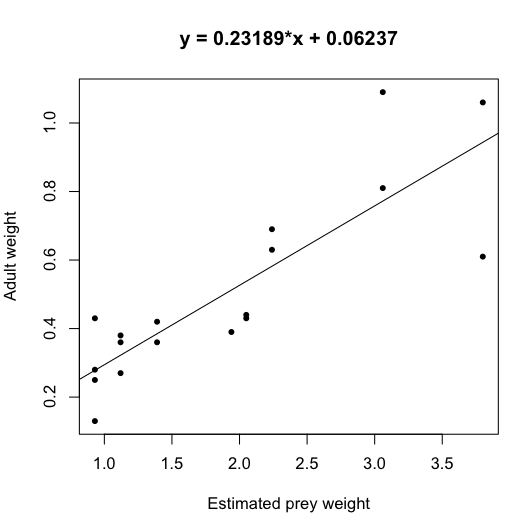 Here's the data and R code:

I added a draft of my story to our paper.[1]

I worked on the fortune teller problem.[2]

Still working on the wasp story. 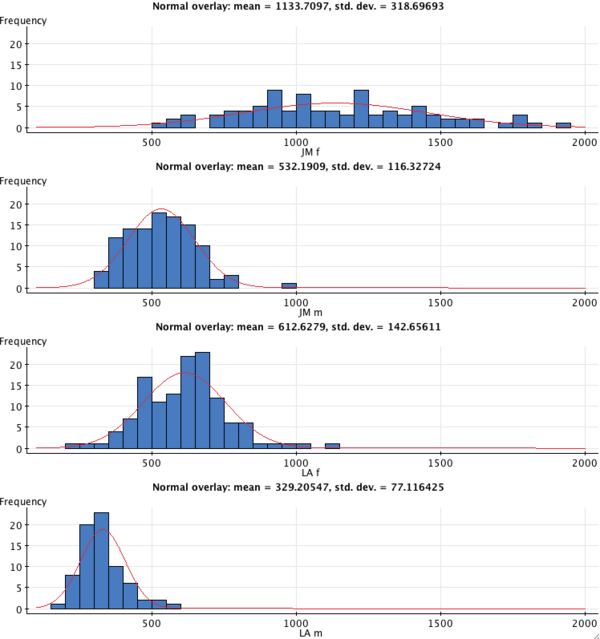 I installed R on my computer and replicated what we saw previously. Here is the empirical probability density function of rwl of cicadas in R from the file newprovisioning_florida.xls. 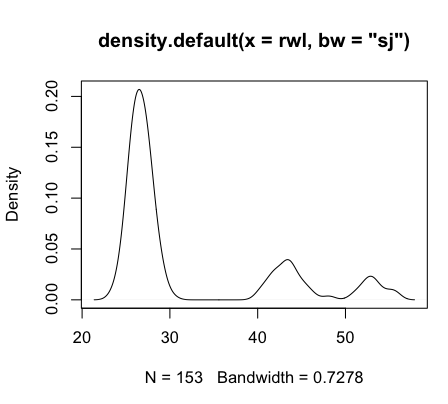 I played around in Mathematica to generate a pdf for each species. The means and standard deviations came from the normals previously generated in StatCrunch using the file newprovisioning_florida.xls. The weights were derived from the number of each species caught with or without measurements. Ne = 232, Do = 27, Tg = 33, Tb = 18 (largest cicadas). So the weights here are 0.74873, 0.08685, 0.10632, 0.05810 respectively (they sum to 1). 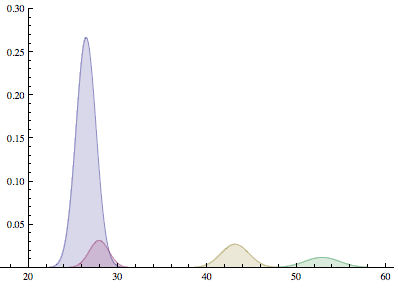 I summed the pdfs: 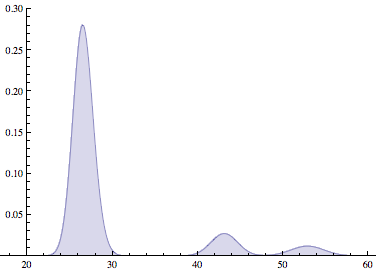 Here is the empirical cumulative from R: 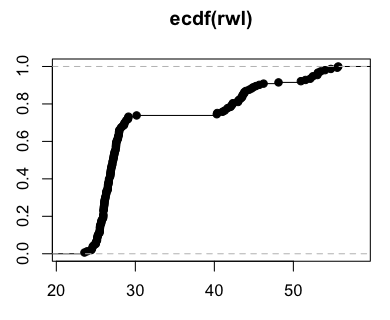 Here is the cumulative from Mathematica: 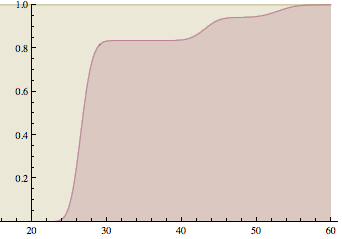 I did some analysis on the right wing lengths of our sample of wasps. I separated the data by sex and location and did some summary statistics. Our sample of wasps at St. Johns are larger in wing length than the sample at Newberry. I had a question: are the masses in the data actual measurements or the predicted mass based on wing length? 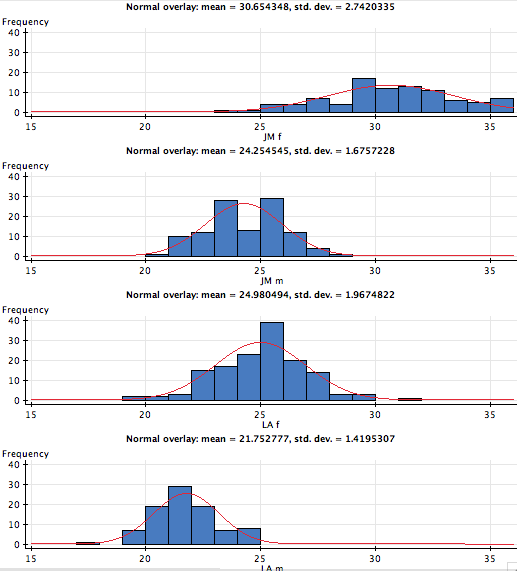 HOWEVER, an ANOVA between the wet masses of female cicadas and male cicadas of the Neocicada species gave a p-value of 0.0142. Females are "meatier". 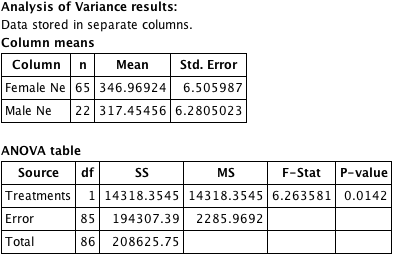 I came up with a first draft function using Mathematica to describe the how the wasp's desired prey mass changes with time. 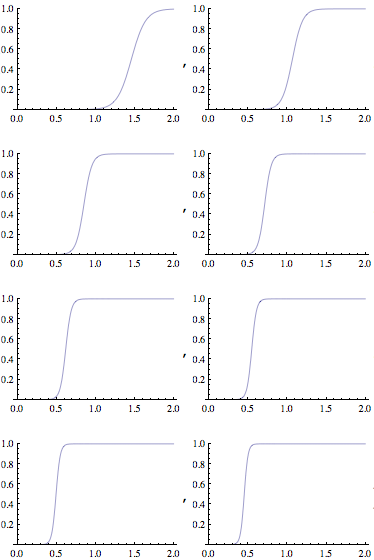 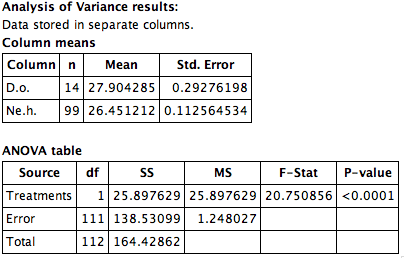 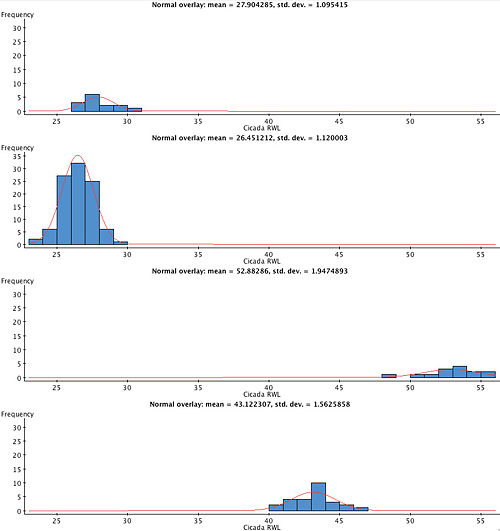 I sorted out the data by species of cicada. The following frequency histograms use the right wing length data for each species. Histograms 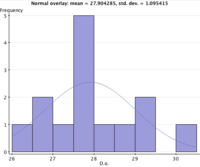 The next histogram is of the species Ne.h. or Neocicada hieroglyphica. This species was recorded the most with 99 catches and fits the normal curve pretty well. 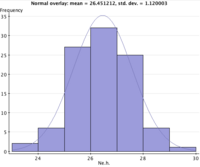 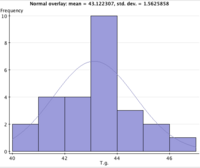 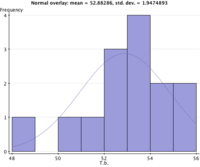 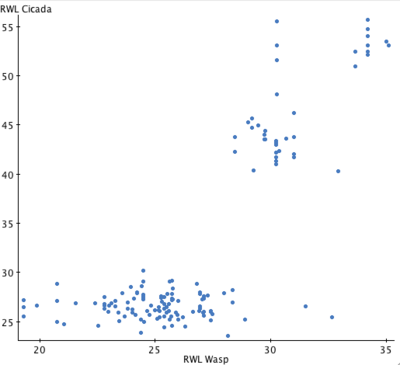 Sigmoid function is a new term to me, but I now know that the logistic function, which I am familiar with, is a sigmoid function. I revisited the logistic equations we looked at in Differential Equations for predator prey modeling.

I read an article about r and K selection as I believe Dr. Hastings said we are looking at K selection.

I looked over the powerpoint by Dr. Hastings and tried to load the dataset into StatCrunch, but I couldn't get it to work.