It occurred to me to go about doing the analysis of the simulations, at least in the simplest cases.

to begin with a distribution (density

) of wasps (e.g. the truncated normal) and see how it evolves throughout future years. 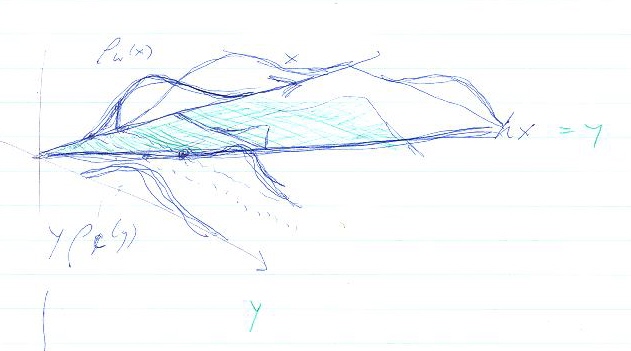 We assume that the cicadas are transformed into wasps as 25% of the mass of the cicada meals. We also assume the "one-if-by-male, two-if-by-female" strategy.

of cicadas. If wasps were free to pick up cicadas at random (and did so -- i.e., were opportunistic), then the (male) wasp distribution would be a scaled version of the cicada distribution. The wasps have a load limit, however, of anywhere from 2 to approximately 2.5 times their mass.

Hence, the average cicada that the wasps will collect will be

A little Fubini later, we have

This is (almost a density) for the cicada of size y: it tells the relative number of cicadas of size y taken (but not the relative proportion, since it's not properly normalized). to normalize it, we simply rewrite it as

If those cicadas were turned directly into males (i.e. via a 1-if-by strategy), then what size would the wasps be? Why y/4, of course. So the relative proportion of each size cicada taken will give us a picture of the cicadas formed.

What's described above is a single iteration. We now do this over and over, which I do via the lisp code analytic_loop.lsp, to produce results such as these (for heft=2.2, and relative cicada populations of .1, .45, and .45 from smallest to largest):