An article in response to Grant

Preamble to Katie and Grayson:

"How to make engineers write concisely with sentences? By combining journalism with the technical report format. In a newspaper article, the paragraphs are ordered by importance, so that the reader can stop reading the article at whatever point they lose interest, knowing that the part they have read was more important than the part left unread."

"State your message in one sentence. That is your title. Write one paragraph justifying the message. That is your abstract. Circle each phrase in the abstract that needs clarification or more context. Write a paragraph or two for each such phrase. That is the body of your report. Identify each sentence in the body that needs clarification and write a paragraph or two in the appendix. Include your contact information for readers who require further detail."

from this article by Edward Tufte, on "PowerPoint abuse".

A story of the great cicada census

Observations of cicada-killer wasp sphecius speciosus in Florida provide data that suggest that predation by wasps on cicadas is not opportunistic. Furthermore, size differences in two populations of wasp and in the cicada species they prey upon provide the opportunity to create a "relative census" of the four cicada species in the study area. We also estimate (simultaneously) the mass-conversion equation of turning cicadas into wasps.

It turns out that sex allocation ratios of wasps provide some of the tools essential for this estimate.

We investigate several issues from the Grant paper, in particular the two issues raised in the title:

In addition to issues raised in the Grant paper,

Here Jon would explain exactly how the data were obtained, what was obtained, etc.

The Cicada-Killer and Cicada Data

We might explain the types of methods we used in our mathematical modeling and statistical analysis:

On why wasps allocate males and females differently

Why is the question of offspring sex allocation important?

Frank (Sex Allocation in Solitary Bees and Wasps (Vol. 146, No. 2. The American Naturalist. August 1995, and cited in Peter Grant's article) claims to have developed "....a simple theory that predicts an increasing F/M allocation ratio with increasing F/M size ratio."

But females may, in hunting, be looking at their resources x as their total success in obtaining cicadas; and, based on how they're doing, they may allocate more or less to males, say.

If resources are limited, they may invest more in males (females won't find enough to produce offspring, so invest in males as they may inseminate those alpha females which manage to succeed in tough times).

It may be that a female without a single cicada goes out looking for more, doesn't find any more, and so lays a male. In a way, it's a Baysian approach to resource availability: if I'm not finding any, then there aren't any. If a wasp goes hunting and finds a second, then there are lots of resources, and I should make a female. Let the market decide whether we've got lots of resources, and hence can sustain a large number of females, and our population will swell; or there are few resources, and we should cut down on production (females).

Size variation of the cicada killer wasps in Newberry and St. John, Florida

In this study, the Eastern cicada killer, sphecius speciosus, was observed in both Newberry, Florida and St. John, Florida. However, there was a large variation in the size of the wasps from one location to the other. The wasps in St. John, Florida were significantly larger than those in Newberry (see table below, and figure).

One hypothesis to account for the size variation of the wasps is that the wasps in Newberry are smaller because Newberry is more residential. In Newberry, female wasps were found burrowing in the lawns of homeowners. These homeowners may consider the wasps a pest because the soil that is excavated forms a mound around the entrance to their nests and the male wasps have very aggressive territorial behavior. Extermination would tend towards the largest female wasps because their nests are the largest, and therefore, more noticeable.

We assume that the size of the wasps in St. John would be the same size as the wasps in Newberry if extermination does not occur. If we take the size distribution of female wasps in St. John and remove the upper half from the population, the average female wasp becomes smaller. The maximum size cicada that a female wasp can carry will become smaller, and therefore, the wasp's offspring will be provisioned with smaller cicadas. It is known that the provision size for wasp offspring is directly proportional to the size an adult wasp can become. So a reduction in the maximum size cicada that a wasp can carry will result in an overall shift in the size distribution of wasps similar to those in Newberry. 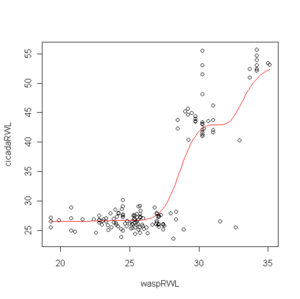 Andy here: Now let's think about how to show if the shift is what we'd expect. If we truncate the female population so that they can't take the largest prey, then the offspring of the population will be smaller. How much smaller? Frank has some models for that in his paper on Sex Allocation. We use the model for the population with the largest removed -- a truncated normal -- then eliminate the big cicadas from the buffet. We use the model that Katie came up with as the resources by size (changing everything into mass), then figure out what the size distribution of the next generation should be -- in mass -- and reinterpret as RWL.
We might do this for a few generations, and see what happens....

With the TG species taken as the standard, we obtained the following results (using this lisp program with the data in this file), and based on backwards step-wise regression with indicators for each species:

We interpret this as follows: the DO and TG species have the same regression equation, while the NH requires both a different constant and slope, and the TB species requires only a different slope.

One of our objectives was to create a model that would allow a wasp's right wing length to be a predictor of its mass. Using nonlinear regression, Katie created the power model

. It is not surprising that the power is near 3. An object's mass is the product of its density and its volume, which has three dimensions. For a box with equal sides x (a cube), we could predict its mass using the power model

For example, I simulated a normal distribution by generating random normal data in StatCrunch with a mean of 4 and standard deviation of 1. Below is the histogram with a binwidth of 0.52. 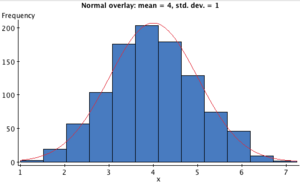 I transformed the normal data using the model

. Below is the histogram with a binwidth of 30.

The right tail is longer, therefore, this distribution is right-skewed. Here, the mean is greater than median which is greater than the mode. The transformed data is no longer normally distributed (if it were, the mean, median and mode would all be equal). This demonstrates why we would want use a linear measurement, i.e. right wing length, which appears to be normally distributed when performing statistical tests.